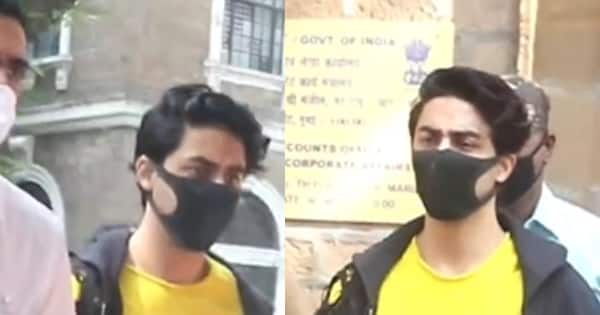 Aryan Khan was granted bail by the Bombay High Court in cruise ship drugs case on several conditions. One of his bail terms was that he is supposed to appear in front of the Narcotics Control Bureau. Being Friday, Shah Rukh Khan‘s son made his way to the NCB office to mark his attendance. The pictures of the star kid making way to the NCB office have hit the internet. Wearing a yellow t-shirt, jacket and joggers – Aryan was spotted entering the office. Also Read – Revealed: Shah Rukh Khan-Gauri’s birthday plans for son Aryan Khan; deets here

Mandatory weekly appearance before NCB was one of the conditions set by Bombay HC while granting him bail in drugs-on-cruise case pic.twitter.com/lx61ZSD4jg

Shah Rukh Khan’s son, #AryanKhan appears before Narcotics Control Bureau, to mark his weekly (every Friday) presence before the agency

Mandatory weekly appearance before #NCB was one of the conditions set by #BombayHC while granting him bail in drugs-on-cruise case pic.twitter.com/EVTNkBNy86

Before Aryan Khan, Munmun Dhamecha was also spotted at the NCB office. She is one of the co-accused in this case. Also Read – Aryan Khan’s birthday: Suhana Khan is all heart for an adorable throwback picture posted by cousin Alia Chhiba ahead of her brother’s birthday

It was on October 2 that Aryan Khan, Arbaaz Merchantt, Munmun Dhamecha and others were detained by the Narcotics Control Bureau after a surprise raid was conducted on a cruise. They were arrested the next day and on October 7 they were sent in judicial custody. Aryan Khan and others were lodged in Arthur Road jail for almost three weeks before the Bombay High Court granted them bail. Also Read – Shah Rukh Khan’s big move for Aryan Khan before he gets back to work on Lion, Pathan, Tiger 3 [Exclusive]

Tomorrow, Aryan celebrates his birthday and as per the latest updates, he is going to have very low key celebrations this year. He will be spending time with family at Mannat.