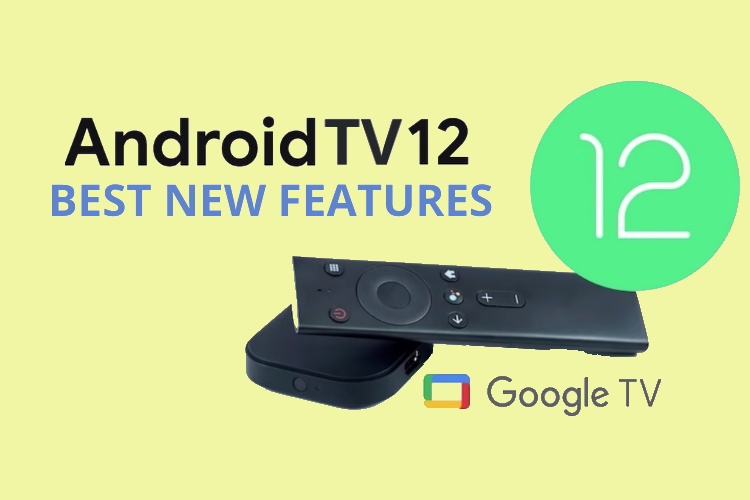 With Android 12’s best features astounding phone users, it’s understandable that everyone is looking for a way to install Android 12 on their phones. However, were you aware that Google has also been working on Android TV 12 in the meanwhile? Announced a few months ago, the Android TV 12 beta contains some interesting new features, including privacy indicators, 4K UI elements, and more. As someone who has been using Android TV 10 for quite a while, I was excited about any new changes. But what exactly are these features, and are they good? Well, I have installed the Android TV 12 beta, and here are the best new features of Android TV 12.

I have divided the Android TV 12 features list depending on their type and importance. However, if there’s a particular feature you are interested in, feel free to use the table below to jump to it.

One of the things people are loving about Android 12 on smartphones is the amount of control it now gives users. Android users can now completely disable their phone’s camera and microphone by toggling them off from the quick settings panel. While that is amazing, even TVs nowadays are prone to privacy concerns.

Well, Google has acknowledged that fact and has brought the same features to Android TV 12. Starting with Android TV 12, you now have dedicated Microphone and Camera toggles to disable these sensors altogether. Found under the Device Preference settings, these toggles are easy enough to reach.

So if you are someone who grants your TV apps access to mic and camera sensors but is too lazy to undo that, all you need to do is flick this switch. Your TVs mic/ camera will be disabled immediately. Unlike other dynamic settings, these two toggles are manual and will remain in that state unless turned off. The mic/ camera toggles are definitely one of the most exciting features in Android TV 12.

Further addressing privacy concerns, Android TV 12 also comes with privacy indicators for the microphone and camera sensors. These indicators light up every time an app or service is using the TV’s mic or camera. The indicator appears on the top right of the TV and looks similar to the phone’s version of Android 12. So in case you are worried about an app snooping on you, this handy feature will let you know of that. It works system-wide, and during my testing, did not fail to appear even once.

While the new mic /camera privacy indicators work well in informing the user, they are not as prominent as one would expect on your TV. Perhaps Google needs to display bigger pop-ups to get the point across, and that’s the feedback some users will bring up once they use the Android TV 12 update.

While an adaptive refresh rate is something Apple TV and Nvidia Shield users enjoy, Android TV has been left out of it until now. Android TV 12 brings a new setting called “Match content frame rate” under the Display & Sound settings. For those unaware, this new feature will allow your display to automatically switch its refresh rate depending on the content on the screen.

For instance – Android TV 12 will now switch your display from 24fps to 60fps depending on the type of video or app being shown on the screen. Aimed at eliminating stutter and improving your viewing experience, Refresh Rate switching will ensure Android TV 12 plays all your content at the optimal frame rate without any hitches. However, if you would rather not use this feature, you can easily disable it from the settings menu.

For instance – If you are casting any of the best Netflix movies or TV series on your Android TV, you will need to hold down on the Google Assistant button and say “Move this to the bedroom display“. Now, it will stream the content on that device instead, be it a smart TV or smart display. Well, it gets even better. Is the stream quality good, but the audio output is not enough for you? Well, the new Stream Expansion feature allows Android TV 12 users to add additional speakers for more sound.

While a minor detail that some may fail to notice, Android TV 12 has brought about a small change in permission controls. Starting with the newest update, any pop-ups for an app asking for permission will grant you more options to choose from. So while you could only Grant or Deny app permissions on Android TV 10 or 11, you now get more specific options.

This small yet important change is a welcome one as it now gives Android TV users more flexibility over specific permissions for apps. So if you are the type of user who will only use YouTube’s voice search once, you can choose the “Only this time” option. You can then rest assured that Android TV will revoke the mic permission once you exit the app. Thus, you are more in control of your privacy now.

Android TV 12 follows its mobile counterpart and now comes with minor design touch-ups. For starters, besides the enhanced privacy, the permission pop-ups in Android TV 12 are displayed using a box with rounded corners. This is different from the older Android TV’s traditional rectangular design that occupied the bottom part of the screen. Prompts have been worked upon even further, as these pop-ups have now become transparent to make them more appealing.

While the overall design of Android TV 12 and animations remain pretty much the same, these UI changes are a welcome improvement to an already good design.

One of the big changes Google announced in the latest Android TV 12 beta was the home screen. Rendered in 4K, the home screen and all its UI elements are supposed to provide the best visual experience possible moving forward. That was a change I was excited to check out, but it has failed to appear. The screenshots captured below on the Askey ADT-3 devkit were rendered in 1080p despite the Android TV 12 running on a supported 4K TV.

While the screen does look a bit sharper, this is not the upgrade to 4K that the company detailed in its official blog post. Perhaps the same will roll out in the final build of Android TV 12.

I don’t think I need to tell you how painful it is to enter a long Wi-Fi password using nothing but your Android TV remote. Google seems to have heard the feedback loud and clear and added a new Quick Connect feature in Android TV 12. You will no longer have to manually input the Wi-Fi password letter by letter using the Android TV’s remote.

Available under the Network and Internet settings, Quick Connect for Android TV generates a QR code that mobile users can scan. The scanned code on the phone will lead to the Android TV’s Wi-Fi connection page allowing users to handle the text input from the mobile itself. However, almost like all early builds of software, the Quick Connect feature does not currently work as the QR code was empty and led me nowhere.

This useful feature now also brings more flexible time options. So instead of just choosing from a couple of options like before, Android TV 12 users can set stricter time constraints on their devices to power them off. A responsible move by Google, the Energy Saver is a feature every Android TV 12 user must enable.

A nice feature that is making its way to the devs and Android TV 12 users is background blurring. Working across apps and cross windows, background blurring will allow devs to add different visual layers in order to add an aesthetic appeal to the experience. As you can see below, the transparency of the box adds various layers that create an appealing effect while still providing a glimpse of what’s beneath it.

Background blur will also help users distinguish between different UI layers and aid accessibility. We can expect to see this feature live soon as Google and other devs implement background blur in Android TV 12.

Android 12 users will now be greeted by a new boot animation that looks equal shades of attractive and refreshing. While this boot animation is also in Android TV 11, most users will find it new since the number of TV 11 users are few and far between.

What Is Your Favorite Android TV 12 Feature?

While the above set of features are a welcome change, Android TV 12 seems to be more or less the same as its predecessors. However, if you are part of the mobile userbase waiting for the Android 12 update, find out when will your phone get Android 12 right here. OnePlus mobile user instead? Learn how to install OxygenOS 12 based on Android 12 on your OnePlus 9/ 9 Pro, and check out a list of OnePlus devices that will get the OxygenOS 12 update. So which one is your favorite Android TV 12 feature? Let us know in the comments below.